The first ancestor in my tree with this surname is Elizabeth Sinclair.  Her relationship to my ex-husband is: 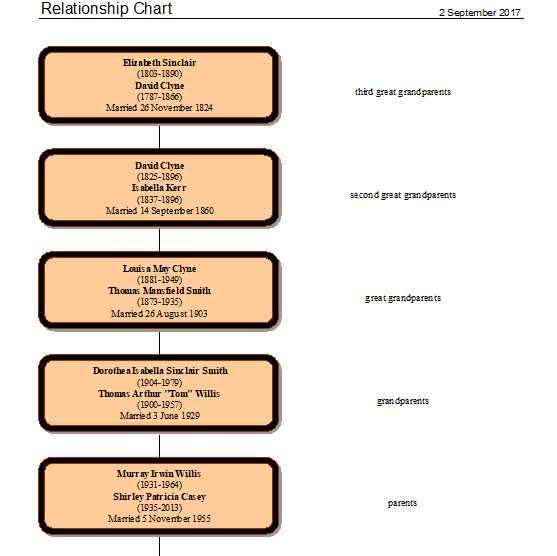 Elizabeth Sinclair was born 9 Aug 1803 and christened 14 Aug 1803 at Olrig, Caithness, Scotland.  She was the daughter of James Sinclair and Elizabeth Meiklejohn.

She married David Clyne on 26 Nov 1824 at Bower, Caithness, Scotland, and they had 10 children:

Elizabeth died 12 Mar 1890 at Upper Maffra in the Colony of Victoria.

James Sinclair was born about 1760.

James married Elizabeth Meiklejohn on 5 Dec 1783 at Olrig, Caithness, Scotland.  They had 9 children:

Based on Scottish naming patterns James’ father would probably have been Alexander, and his mother may have been called Ann.  Unfortunately, the parish registers don’t include the mother’s name for the entries I have found around the time James was born.  I found the following baptisms for a James Sinclair, with a father named Alexander, born between 1750 and 1770 in Olrig

I found two marriages for an Alexander Sinclair in Olrig between 1750 and 1770:

Since I can’t be sure whether James was christened in Olrig, or that his father was named Alexander, I haven’t been able to trace this line any further back at this stage.

I have 2 other connections to the Sinclair surname.  I believe that Elizabeth Sinclair’s mother Elizabeth Meiklejohn was the daughter of John Meiklejohn and Margaret Sinclair.

Margaret Sinclair was born around 1740.

She married John Meiklejohn on 12 Nov 1761 at Olrig, Caithness, Scotland.  They had three children:

There are two possible baptisms in Olrig.

Since I don’t know which, if either, of these baptisms are for my Margaret, I haven’t been able to trace this line any further back either at this stage.

Catherine Sinclair was born about 1760

I have not yet been able to find a marriage for Catherine and David Clyne, but they had 9 children: