Each week on Randy Seaver’s Genea-musings blog he has a post for Saturday night Genealogy fun. Because of the time difference, I have called my series Sunday Afternoon Genealogy Fun. This week the mission was:

1)  Is your genealogy software family tree database perfect?  With no errors or inconsistencies?  Yep, mine isn’t either!  Big time.  With over 49,000 persons there are bound to be some errors in my tree.  Even 1% would be 490 persons or 1,500 events!

2)  This week, find your genealogy software’s “Problem Report” or something similar.  Tell us how you found it, and what it tells you about the problems in your family tree database.

I use Legacy Family Tree as my main genealogy program, but Legacy has 5 tabs of options for the Potential Problems report.  Since I also have RootsMagic, I decided to use RootsMagic, and to use the same settings that Randy used. 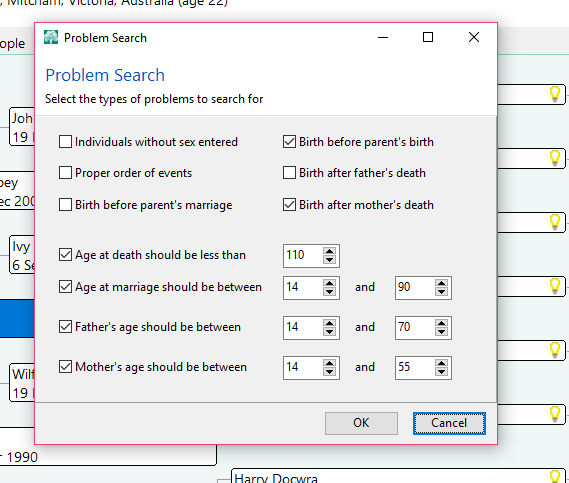 I had only 7 problems.

I checked the records I had for Marguerite, and found that I didn’t have a source for her year of birth.  I then found the family on the 1901 census, which showed she was born in 1872.  I had entered 1882, so I have now changed her birth year to 1882, which eliminates the errors for Marguerite, and her son Harry Rafael Abraham.

For the third error, I only had estimated dates of birth for Edward and his mother.  The information I have so far on the family is from Edward’s will, and his father’s will. Edward’s will was written 29 Apr 1545 and proved 19 May 1545, and his father Martin’s will was written on 22 Nov 1534 and proved 28 Nov 1534. To fix the error, I removed the estimated birth dates for Edward and his mother.

In checking the next 2 problems, I found in my notes that these two children were adopted. In Legacy I have the Relationship to Father and Relationship to Mother set as Adopted, but there doesn’t appear to be any option to show this in RootsMagic, so it comes up as an error.  I have therefore selected to mark these as not a problem.

There are 5 tabs for this report.  I chose the following options: 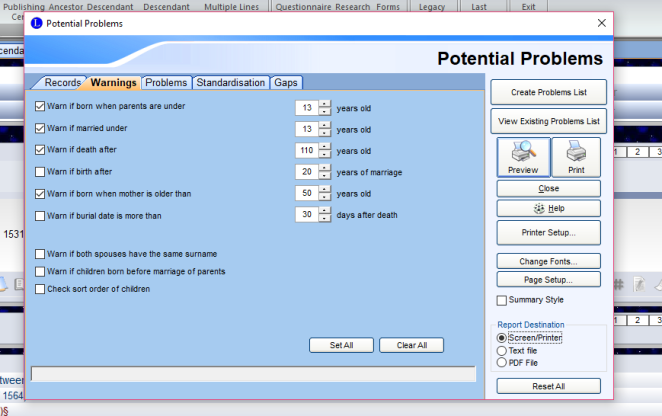 I unchecked all the options on the Standardisation and Gaps tabs.

I can view this in the Potential Problems List

Or as a report:

My next step will be to go through and check these problems.

Using these reports is not the only way to check for errors in your database.  You can also check for any problems as you are working on people.  In RootsMagic, there’s a little warning icon:

In Legacy, there’s an exclamation mark in a red circle:

I keep my error rate low by checking for these warnings as I am working on my tree.

Background of featured image is a photo from Unsplash – https://unsplash.com/photos/-m1duEoiJng Photo by David Di Veroli