There were many cases of misfortune that I could have written about, but I decided to write about Ernest J Fuller, as I have recently been researching his life.

My relationship to Ernest is as follows: 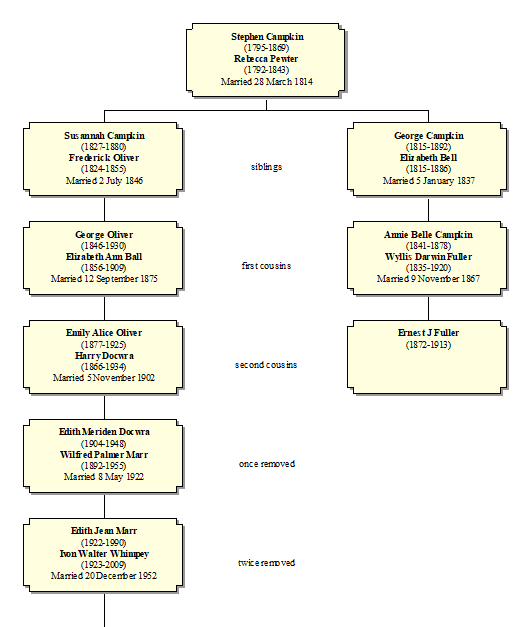 Ernest J Fuller married Blanche Patterson on 22 Jun 1910 in Gila County, Arizona.  Ernest was 36 years old, and Blanche was 18.  They had one son, Delbert Hughes Fuller, who was born 3 May 1911 at Pine, Gila, Arizona.   Misfortune struck the family in January 1912, when Blanche was killed when she was thrown from a wagon.  The following is a transcript of a newspaper article which gives details about the accident, which was found in The Arizona Republican, Sunday Morning, January 7 1912 Page 1, cols 3-4 (https://www.newspapers.com/image/42258936/?terms=fuller)

MESA
FACTS REGARDING THE DEATH OF MRS FULLER
Body Brought to Mesa and the Funeral Will be Held at 11 O’clock Today.
The cause of death of Mrs. Blanche Fuller, wife of Ernest Fuller, which occurred at Pine Creek, Saturday, as given in the Republican Sunday morning, was incorrect in the statement that the team was frightened by an automobile. The facts, as brought out at the coroner’s inquest, are that Mr. and Mrs. Fuller with their eight-months’ old child, a boy, left their home in Pine, Arizona, intending to drive through to Mesa to attend the funeral of Mr. Fuller’s cousin, Mrs. Ida Fuller Hobson, which occurred yesterday. They had reached a point on the Salt River where Pine cheek[sic] joins with the Salt, about no one, Saturday. They drove the horses to the river, near the road and Mr. Fuller got out of the wagon, loosened the check reins and filled a jug with water to be used at luncheon. Mrs. Fuller remained in the wagon, holding the baby and the lines. One of the animals in raising its head, caught the bridle on the end of the neckyoke, or possibly the tongue, gave a jerk, broke the bridle bit, and, becoming frightened, the team started to run. The bridle slipped back on the neck of the horse and Mrs. Fuller was unable to control the team. Mr. Fuller started after the team, but they were going too fast for him to overtake them. The horses kept pretty well to the road, though several times the two right hand wheels were perilously near the bank. When the junction of the old road down the sand wash and the government road was reached, the team started on the down grade over the old road. There the accident occurred. As shown by the tracks and from the statement of the husband, so far as he could tell, the right-hand wheel struck a rock and Mrs. Fuller and the baby were thrown out of the wagon. Mr. Fuller was not sure whether she was thrown or jumped, but it is evident she was thrown out, falling so that one of the wheels passed over her body, crushing the lower part of the breast bone. The marks of the wheel were shown where it had passed across the arm and breast. While this injury would have undoubtedly caused death, the direct cause was from a broken neck. A wound on the upper part of the forehead showed where she struck a rock and the neck was undoubtedly broken at that instant.

Mr. Fuller arrived in a brief time and picked up the baby, but finding it apparently not seriously hurt, turned his attention to his wife. He thought she was simply unconscious. During the race after the team, he had unconsciously clung to the partially filled jug of water, and he tried to restore his wife by wetting her face. While doing so, the woman’s mouth closed with a snap. Believing she was reviving, Mr. Fuller said:

The woman gasped a couple of times and then all was over. Mr. Fuller could not believe she was dead and for some time tried to restore respiration. Finally, realizing that she was gone, he turned his attention to the baby. He did the best he could for the little one, then covered his wife with a blanked, placed a damp cloth on her face, and waited for some one to pass along the road. He did not know where the team was, or whether the wagon was wrecked, and he dared not leave the baby to make a search.

It was about twelve when the accident occurred, and no relief came until 2 o’clock, when Clifford Hemperly, with a party of four gentlemen from San Luis Obispo, California, W. M. Beach, vice-president of the Salt River Valley Bank, and Arthur A. Jones, city clerk of Mesa, arrived on their return trip from Roosevelt. Mr. Fuller called to them and they stopped to investigate. Messrs. Beach and Jones remained with Mr. Fuller, while one of the California men took the baby in his arms and the party went on to Fish Creek.  Mr. Hemperly telephoned to Mesa for the coroner and undertaker. The baby was brought to Mesa and placed in care of Mrs. Fred Passey, an aunt of the dead woman. A doctor was called and it was found that the child’s right arm was broken and the collar bone fractured. The injuries will soon heal.

When the auto had gone on its way to Mesa, Mrs. Jones and Beach followed the track of the wagon, and a quarter of a mile away found the team with the wagon intact. The animals had run until they struck the upgrade in a sand wash, and then came to a stop. The only damage was the broken bridle-bit.

The coroner and undertaker arrived at the scene of the accident about 7 o’clock; and, in company with the jurors, examined the grounds and gained what information was to be had. The body of Mrs. Fuller was brought to Mesa in a car driven by Wade Hemperly. A stop was made at Fish Creek, where the jury, composed of W. M. Beach, Arthur A. Jones, W. A. Burton, George L. Allison, B. F. Joslyn and W. W. Hemperly, rendered a verdict of accidental death, in accordance with the foregoing information.

John Wallace and four companions, who were hunting in that part of the country, came to the place of the accident shortly after the arrival of Justice Irwin and party, and they remained to see Mr. Fuller and the team taken safely to Fish Creek: the next morning he was brought to Mesa in an auto sent out by Fred Passey.

Mrs. Fuller was but nineteen years old, and was the daughter of Mr. and Mrs. J. S. Patterson, of Pine, Arizona. The parents were notified of the occurrence, as soon as possible, and the funeral of Mrs Fuller was postponed until their arrival.

Word was received yesterday afternoon that Mr. and Mrs. Patterson would reach here last night at 8 o’clock and the funeral was arranged to be held today at 11 o’clock, from the tabernacle.

Mrs. Fuller was a very popular lady, well known to many Mesa people, and her tragic death is regretted by her many friends. Mr. Fuller is a nephew of Cornelius Fuller and he has the sympathy of the community in his bereavement.

Ernest Fuller died the following year, on 10 January 1913, from pernicious anaemia.  This left the baby, Delbert, an orphan, who was then raised by his grandparents, James L Patterson and Margaret Luella Webb.

Background of featured image is a photo from Unsplash – https://unsplash.com/photos/2iPhBX4vigc Photo by unsplash-logoVincent van Zalinge